Archive for the tag “Venus in Furs”

I’m back from the Sunshine State

I had a blast in Florida. A visit there always confirms that every single person in the Tampa Bay area is involved in the local arts and music scene. At least, everyone I know is.

On Friday, I went to the “Sound Effects” show – an exhbit of local art with a musical theme – at the Tampa Museum of Art. The show was curated by Mitzi Gordon, a photographer with Pyramid Photography (and a former member of the shoegazey Vera Violets). I hung out at that show with Bradley Valentine, Mitzi’s partner in Pyramid and a very talented photographer and writer.

Favorite piece of the night: Ryann Slauson’s “Tribute to the Arcade Fire,” an installation of cartoony instruments made out of cardboard and masking tape. Here is a pic of it I swiped from Ryann’s Myspace page: 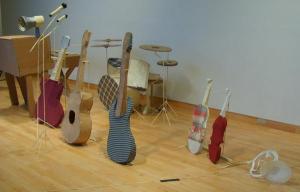 The next night, I caught the musical half of “Sound Effects:” a gig in Ybor City’s popular club Crowbar that featured Ryann drumming for my favorite band, Giddy-Up, Helicopter, who performed in fluffy animal costumes – in hot, humid Tampa weather. What dedication to art! Here is a pic courtesy of Donavan Astwood at DEAPhotos (Click to enlarge):

That night also served as a CD release party for Jeremy Gloff‘s new album, 1987. Jeremy is a multi-media ham and he came to the stage singing along to the CD, which was already playing. It was very post-performance. His set also featured a narrator and choreographed dance sequences. Deliciously homo!

My lady friend and I got to Crowbar too late to see Venus In Furs perform. The band is an all-female tribute to the Velvet Underground made up of popular Tampa Bay area musicians and they totally rock.

I also went to the birthday party for my friend Natty Moss Bond, another mainstay of the Tampa music scene whose old band, Multi-Color House, was on DB Records.

Sunday night I spent watching the god-awful Emmy awards with my friends – including Alex Zayas, who plays drums with the awesome and fun all-girl band Super Secret Best Friends.

Everyone is a superstar in the Tampa Bay area and that’s one reason I love it there. Sometimes it feels like the scene is completely self-contained – like people make art and play music for the sheer fun of it and not in the hopes that they’ll become rich and famous.

I think that’s characteristic of the most interesting regional music scenes like, for example, all those great bands in Athens, Georgia in the late 1970s and early ’80s. They were doing it to have fun and be creative. Playing at parties was the goal, not getting signed to major labels and conquering the world, although that’s what happened to R.E.M. and the B-52s.

All my friends down in Florida deserve to be famous, whether or not they care to be. Every single one of them is fun and creative and I love to visit them often to see what hijinks they are getting into. I miss it there.