Archive for the tag “memoir”

I recently went on a pretty bad Go-Go’s bender after reading Belinda Carlisle’s memoir Lips Unsealed. I couldn’t stop listening to the old albums or watching their videos for a solid week. Have you read the book?

Anyway, the book is filled with interesting tidbits about the late 1970s/early 1980s Los Angeles punk scene. And of course, Belinda shares plenty of stories about the Go-Go’s heyday.

For instance, how about this bit of trivia. In the “Our Lips Are Sealed” video, during Jane Wiedlin‘s “Hush my darling, don’t you cry” bridge, if you look closely you can see Jane’s not alone in the backseat of the convertible. Belinda, who was hungover and didn’t much feel like making something called a “music video” anyway, can be seen hunched over in the driver’s seat.

Neat, huh? Are you a Go-Go’s fan? A Belinda fan? Have you read the book?

Last night I started perusing Born Standing Up, Steve Martin‘s memoir of life as one of the most successful comedians of the 1970s. 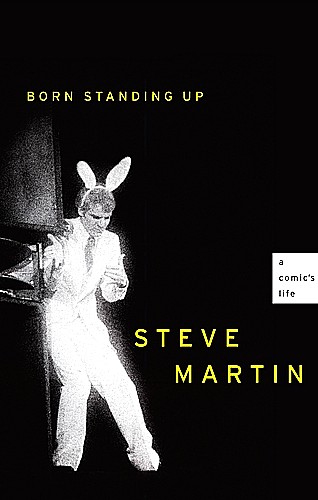 I’ve been wanting this book since it was published in late 2007 so I was excited to find a paperback copy for sale at my local library for just 50 cents. So far, it’s a great read with Steve writing in a decidedly sober tone about his childhood and his strained relationship with his father and how it affected his relationships later in life.

Are you a fan? He’s done so much: stand-up comedy, films, music, books. What’s your favorite Steve Martin moment?

Posted in art, Books, Comedy, Culture, Film, music, Television, Vegetarian and Vegan and tagged " I like a woman with a head on her shoulders. I hate necks.", 1970s, Born Standing Up, comedians, memoir, stand-up comedy, Steve Martin

I haven’t posted in three days because I can’t put down this damn book:

My friend Margaret gave me her copy of Barbara Walters‘ memoir Audition after she finished it. I picked it up last week and I’m halfway through already. It’s a great read, really personal and filled with interesting first-hand accounts of history happening. Barbara writes candidly of her erratic upbringing – she was the daughter of a showbiz entrepreneur whose luck ran hot and cold – and of her interactions with giants of the 20th century, both politicians and celebrities.

I really enjoyed the sections on her interviewing Cuban leader Fidel Castro and the groundbreaking joint interview with Egyptian president Anwar Sadat and Israeli Prime Minister Menachem Begin. Thirty years ago those two dreamed of peace in the Middle East. Seems like a fantasy now.

It was also interesting to read about how bad NBC screwed her over throughout her career. Wow. It’s great to be a groundbreaker — Barbara was not only the first female co-host of the Today show, she was later the first female evening news anchor (for ABC) — but she had to pay for it along the way.

Looking for a warm, witty eyewitness account of the latter half of the 20th century? I’ll lend you Audition when I’m done.