Pictures from my trip to Florida

Okay, I’m back in D.C. and ready to tell you about my two week trip to Florida. On the first Saturday I was there, a group of us trekked over to Plant City for the ultra-rednecky Florida Strawberry Festival. Here’s me and my friend Carrie:

(I had to buy an $8 pair of sunglasses at Big Lots on the way to the fair because that Florida sun will burn your eyes clear out of your head).

Although the festival features plenty of rides:

and game booths, mostly what we did was eat. Here’s a picture Carrie took of my lady friend and her best friend sharing some nutritious fried dough. Or a “gut buster.” Good question: What name do you call this delicacy? 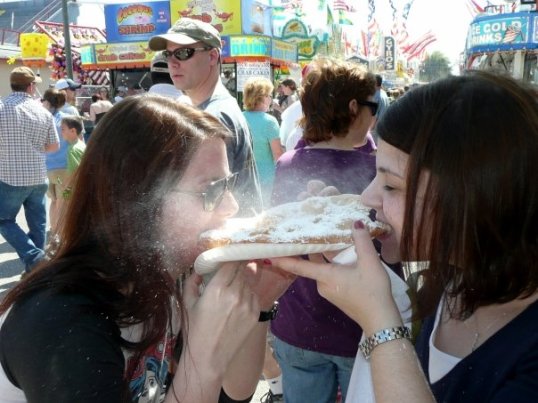 As we left the carnival, we took pictures of all the interesting things you see when driving to and fro Plant City. For example, these flags in one resident’s front yard:

And some of these gigantic dinosaurs that entice drivers to make a stop at the famed Dinosaur World:

And perhaps most curious, the Stonehenge-like monument built of vintage AirStream trailers:

After the Strawberry Fest, we headed over to the gay carnival in Ybor City where our group ate some more, hit each other repeatedly in the bumper cars, and I laughed uproariously at this bear ride:

A bear ride at a gay carnival: get it?

After the carnival we went to The Grass Root, a great vegan and raw food restaurant in Tampa. Yum! I love their onion bread.

That night some of us went to the Ten Pins bowling alley on Pass-A-Grille beach and entered the big karoake contest. A bunch of my friends sang and the crowd loved them. However, the same crowd was flummoxed by my friend Eve‘s faux drunken rendition of “The Greatest Love of All,” which had her hobbling around with a martini glass (filled with water), warbling the lyrics. Eve proceeded to take a beer off someone else’s table and swig it, kick off her shoes, and for the big finale, fall flat on her behind. The whole time Eve was “performing,” the alley’s owner, an older woman, was pacing back and forth, frantically telling everyone in Eve’s group to “Make her stop!” I told her Eve wasn’t really drunk and it was just a joke, like on Saturday Night Live, but she was furious. Eve and she continued to bicker all evening after that with Eve, at one point, accidentally insulting a mentally disabled woman. True story.

Needless to say, no one in our group won one of the three cash prizes that night.

But, what a lively beginning to my epic trip home!

3 thoughts on “Pictures from my trip to Florida”