When will we see the Astro Boy movie?

The last I heard the movie based on Osamu Tezuka’s 1950s Japanese comic book character Astro Boy was going to be released in 2009, but does anyone know more about the specifics? 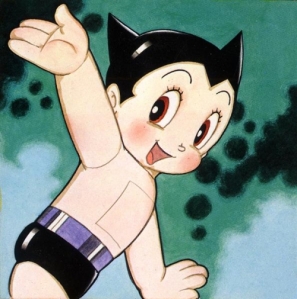 Let me say this: it’s going to be one of those three dimensional CGI numbers, not regular old fashioned-animation. I don’t know how I feel about that. Well, that’s not true, I do know: I hate it. But, I don’t want to be curmudgeony about technology. The movie, directed by David Bowers, features Nicholas Cage, which concerns me, and Donald Sutherland, who really messed up the Buffy The Vampire Slayer film in the early 1990s. Just ask Joss Whedon..

Astro Boy starred in his own television cartoon in the 1960s, the 1980s and 2000, but Bowers’ film marks the first time the character hits the big screen. Bowers told one interviewer he’s remaining faithful to the story’s poignancy:

“I just wanted to take it and make a fairly straight film, emotionally. It’s really a very emotional story. The basic story is very, very sad about a boy robot who’s built to replace a scientist’s dead son and then the scientist finds he can’t love him and throws him out.”

Eh, I’ll go see it. Maybe. I don’t go to the movies all that much these days. What about you? Rate your interest level from one to ten.