Madonna‘s publicist has confirmed the singer and British film maker Guy Ritchie, her husband of 7 1/2 years, are divorcing. I find it shocking especially since Guy always looks so happy in photos with his wife: 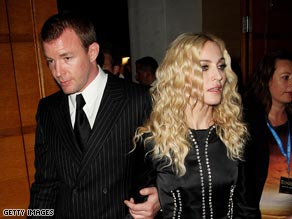 THE BAD NEWS: The couple have no prenuptial agreement, which is interesting since Madonna is worth an estimated $500-million. Though, in the past, Guy’s friends and family have gone on record saying Guy would never accept money from his wife in the event of a divorce. I bet Guy is even more thrilled now that Madonna strong-armed him into adopting that little African kid.

Maybe Madonna can partner up again with her other ex-husband Sean Penn since his marriage is perpetually on the rocks and he’s recently been texting Madonna about his homosexual dalliances.

MY QUESTION TO YOU: Do you care about any of this?

One thought on “It’s official: Madonna and Guy are done”