Okay, so we’ve had a lot of pop culture news today especially about women named Sarah.

* Fox is gonna make a crappy version of the perfect British comedy Absolutely Fabulous. It’s going to be set in Los Angeles and it’s gonna suck because on American TV, Puritanical censors prevent you from seeing the kind of bawdy humor that genius Jennifer Saunders wrote so well.

* The View‘s Elisabeth Hasselbeck continues to have her mental breakdown on national television. Here is today’s clip. WARNING: you’re gonna want to kick her. Even her buddy Sherri Shepherd had to open a can of whoop ass.

But there was also good news:

* My favorite heterosexual couple Jimmy Kimmel and Sarah Silverman are back on.

* Quirky social critic and historian Sarah Vowell released her new book, The Wordy Shipmates, today and she’ll be reading from it and discussing it Thursday evening at Politics & Prose here in D.C. You bet your tuchas I’ll be there.

News about which I am different:

* Hef and Holly broke up – Holly confirmed it on her Myspace blog , y’all! 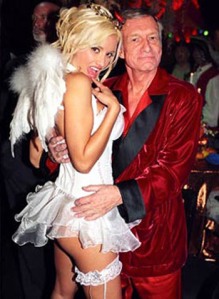 * Misguided VP candidate Sarah Palin is rumored to make an appearance on Saturday Night Live. She better do it soon because in four more weeks, her 15 minutes of fame will be mercifully over.